The Socrates Project: A transformative experience. 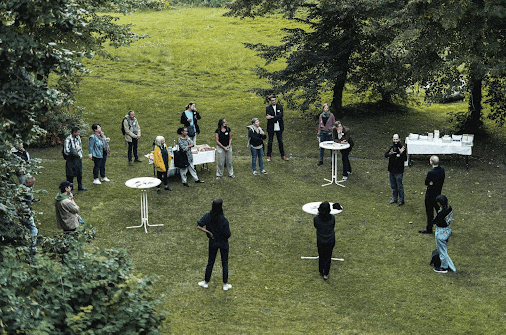 I felt welcomed, I felt that my ideas were valued,”  said Yusuf Almuhafdha, a renowned political activist from Bahrain, living in Berlin. Yusuf is a participant of the Socrates Project, a project which piqued my interest when I stumbled upon it in the civic engagement section of the BCB website, “I learnt a lot about writing academic essays, and I enjoyed the critical texts we discussed with the other participants. In the past, I felt excluded from philosophy, but the Socrates project fulfilled my dream of studying philosophy.”

The first time I read about this project, I was curious to learn how participants in Berlin, Budapest, and Vienna engage in seminar based discussions in these respective cities. The participants gather weekly, to dissect dense texts, learn from each other. Interestingly, teachers are not really ‘teachers’ in a conventional sense, they are peers too. In the Socrates Project, there are no lectures, and teachers are learners as well—like Socrates himself was.

The Socrates Project, an initiative started by Bard College Berlin and Central European University, is the brainchild of Aaron Lambert, the current director of the program. Aaron’s inspiration for the Socrates Project comes from the Clemente Course in the Humanities – a US based organization founded in 1995 (and affiliated with Bard College in Annandale) whose aim is to provide quality education to adults who face various barriers to accessing higher education.

With a similar mission in mind, Aaron worked to obtain funds for the project and support in piloting it, which he found in the Open Society University Network.

At the Central European University in Budapest in May of 2019, about 80 participants took part in the pilot Socrates Project courses. All courses are free of charge. Currently, the Socrates Project is active in three cities: Vienna, Budapest, and Berlin. In Berlin, Bard College Berlin’s Civic Engagement Office hosts the project, with participants from Berlin and beyond.

From published novelists to renowned activists to those neither activists nor published, the Socrates project welcomes people from all walks of life.

Participants join the project for a plethora of reasons: some are disappointed in the ossified nature of higher education, for some it is due to financial constraints which inhibit their entry to or continuation with higher education, and others cite the open access to philosophical inquiry which they claim is a “rarefied field.”

Aleksandar, a participant in “Freiheit und Literatur,” one of the courses taught in German, told me, “It’s a real course with professors, like at university, and yet the atmosphere is so pleasant that all participants want to share their own opinions.” What makes courses in the Socrates Project “pleasant” is not just that the professors foster a conducive atmosphere for learning. It seems to me, from the multiple conversations I had with instructors, that they are really interested in learning from the diverse perspectives of participants. “I honestly enjoyed being part of this project. Working with the participants has been a real pleasure and getting a sense of the Bard College culture has been an enriching learning experience for me as well.” said Moses März, one of the course instructors. “It feels as if we’ve only just started, but I can already say that this has been one of the best and most inspiring classes I ever got to teach. The exchange with the

participants has been extremely insightful and rewarding,” Vincent Hessling, another instructor, told me.

Despite a large number of participants being drawn to philosophy (owing to the Socrates name), The Socrates Project offers courses in both the humanities and social sciences. Last fall, participants took: “Freedom, Un-freedom and Emancipation,” a course in Philosophy and Sociology; “Cave to Wine Cave: Extreme poverty, government intervention, and unforeseen consequences in postwar Italy and beyond,” a course in Political Science and Art; “Freiheit und Literatur,” (Freedom and Literature) a course in Literature and History, and “Formen derFreiheit,” (Forms of Freedom) a course in Philosophy and Politics. This multifaceted nature of the courses is what most participants love about the Socrates Project. “Der Kurs war inspirierend./ The course was inspiring,” a participant taking the course in German told me.

The Socrates Project classes are designed to be interdisciplinary and involve perspectives from various academic fields. It is the Socratic method of teaching and learning that makes the Socrates Project what it is. I got to observe the Socratic method being put to practice in the various classes I attended. I observed both participants and teachers participating equally in dissecting the course texts so that everyone fully understood the main themes and they developed unique interpretations of the readings. Just like BCB classes, the pedagogical methodology is not lecture-based but rather focused on discussion, where instructors guide students through the texts, so that they arrive at conclusions and new thoughts by themselves.

The funding from OSUN guarantees that participants are granted access to a free and high quality education. Participants also receive course materials: books, pens, course readers etc., without having to incur any expenses. Although there is a geographical distance between participants in Berlin and those in Vienna and Budapest, there are channels in place to keep everyone abreast of the other programs’ activities. “We coordinate and plan activities in collaboration with organizers from The Socrates Project in Vienna and Budapest, through weekly Zoom meetings,” said Faiza zu Lynar, Civic Engagement Coordinator and Socrates Project Assistant at BCB.

The Socrates Project in Berlin is conducted in German, English, and Turkish. In Vienna, it’s in English and German (this Spring, Turkish and Serbo-Croatian have been added), and in Budapest courses are offered in Hungarian. Participants in these three cities tackled the theme of “Freedom and Society,” in Fall 2021 and Spring 2022. Freedom, democratic learning, and a contrarian academic space are the common intellectual currency of The Socrates Project. “The theme of freedom and society is not only taught in this course, but also lives. I am impressed by how constructively and creatively different perspectives come together here,” Jeanette, a participant, told me. Participants read a wide array of authors: from a German reading of Immanuel Kant, to Audre Lorde, to Franz Fanon, to Carlo Levi’s Christ Stopped at Eboli.

Sitting in the classes and interacting with the instructors and participants, I learned that sometimes participants wrestled with difficult topics like race, ideology, and politics. Nevertheless, conversations were neither stilted nor strained, they were organic and respectful. Discussions were often interspersed with both laughter and conviviality. “There is nothing to be afraid of, it’s more like a conversation, we discuss course material together. For instance, I’m not their teacher in a classical sense, I’m like their equal, agewise, and some are even older than me,” says Moses März, an instructor. The Socrates Project is open to anyone 18 years or older. The current age range for the Berlin participants for Fall 2021 was between 22 and 80 years.

“Die Diskussionen waren konstruktiv und freundschaftlich, auch wenn die Meinungen manchmal auseinander gingen. Es war toll, das friedliche Miteinander zu erleben, das ist nicht selbstverständlich in unserer Zeit der Spaltung. / The discussions were constructive and friendly, although opinions differed at times. It was great to experience the peaceful discussion, this is not always the case in our time of division,” said a participant taking the course in German. These discussion based classes take place once per week for three months, with different classes happening every Tuesday, Wednesday, or Friday in the evening when it’s most convenient for both the participant and the instructors.

One Tuesday, I toured the “Freedom, Un-freedom and Emancipation” class where Moses März, the instructor, broke down dense ideas encountered in a text by making a diagrammatic representation where the participants linked their ideas with illustrations. This is a learning technique called mapping, where participants lay out connections or create a visual ‘cutaway’

for dissecting dense texts into an understandable or relatable format. This careful dissecting of texts, to discover what they really mean and to engage with them deeply is what both teachers and participants of the Socrates Project really value. “I am so impressed by the new knowledge I have now. We heard of the big names in philosophy but never read the texts in detail, it was great to change that,” Gregory, a participant in the class, told me.

I also sat in on another class, “From Cave to Wine Cave: Extreme poverty, government intervention, and unforeseen consequences in postwar Italy and beyond,” participants of this class did a critical reading of Carlo Levi’s Christ Stopped at Eboli. I was not only amazed by the pace of the discussion but also elated to see the professor and the participants read the book step by step, flagging out the sentences, ideas, paragraphs, and pages that stood out to them. The congenial bond which developed as they pored over the book manifested itself in the enthusiasm with which they discussed the reading. Paul Festa, the instructor, explained some contextual information about the text as well as made an outline of key points on a projected screen for all to see. “As you read, think about things you’d use in writing your paper. What do you notice? What do you notice that you think other people might not notice?” Paul Festa asked them with brio. Then the room flashed with ideas, everyone with different views on the text: some differing, some agreeing, some agreeing to disagree. Classroom space is always a marvel when it transforms into this Athenian milieu where participants become Socratic interlocutors.

After one semester of the Socrates project, participants graduate and receive a certificate of completion. I spoke with graduating participants who all have hopeful plans for their future endeavors. Some participants feel like this has been a lodestar for attaining more knowledge: “I’ve been inspired with what I have learned so far, and I’m excited for the Spring enrollment!” said Emma, a participant. And there are some who get the inspiration to join traditional undergraduate education. Ibrar Mirzai, a current Bard College Berlin BA student, was part of the pilot program at the Central European University, in Budapest.

“In the future we are hoping that the project will expand to different parts of Berlin. We also hope to offer the courses in more languages like Arabic and Turkish, for example.” says Xenia Muth, Director of Civic Engagement and Socrates Project Coordinator at BCB. Despite curveballs from the pandemic, The Socrates Project is poised for success in its effort to change the lives of many in Berlin and beyond. With new classes starting this Spring, the promise of inveterate participants, and the Socrates Project already extending its tentacles of a geographically and linguistically accessible education, one can’t help but admirably admit that the Socrates Project enshrines a rich history and has a promising future.